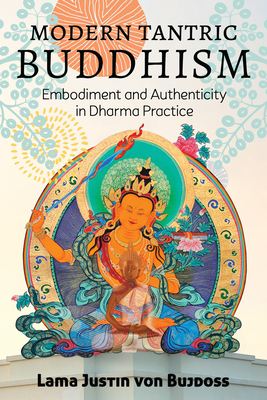 An essential guide for practitioners and teachers to an inclusive form of tantra that directly confrontssystems of power and abuse as a path to liberation
—From the foreword by Lama Rod Owens, MDiv, coauthor of Radical Dharma

Today, a new generation of Buddhists searches for ways to adopt Vajrayana while staying true to its historical legacy. Modern Tantric Buddhism unpacks the principles and applications of this esoteric practice in an accessible and meaningful manner, connecting its roots to a socially engaged, modern-day dharma. Taking a traditional Tibetan pedagogical approach, Lama Justin von Bujdoss divides the book into three thematic sections: Body, as it applies to physicality and embodiment; Speech, or ethical action; and Mind, the context of awakening. Von Bujdoss challenges assumptions about what it means to be a socially engaged Buddhist, and presents Tantra as an ideal vehicle for critically examining today's most pressing social issues while confronting the structural inequities of patriarchy, sexism, colonialism, and racism within Buddhist institutions.

Justin von Bujdoss is an American Buddhist teacher and chaplain. He was ordained as a repa in the Karma Kamstang tradition of Tibetan Buddhism by His Eminence Goshir Gyaltsab Rinpoche in 2011 and given the name Repa Dorje Odzer. Justin is passionate about the preservation of the tantric Buddhist tradition in a way that meets the needs of, and simultaneously challenges, the modern western way of life. From 2012 until 2017 Justin served as the resident-lama and executive director of New York Tsurphu Goshir Dharma Center and is presently the first dedicated Staff Chaplain for the New York City Department of Correction. In March 2018 Justin was appointed Executive Director of the Division of Chaplaincy and Staff Wellness for New York City Department of Correction and leads all wellness initiatives for the agency.

“Modern Tantric Buddhism reads like an extended late-night conversation, wherein Western Buddhists can discover the authentic essence of tantra and develop confidence in its relevance to their own lives and spiritual aspirations. Lama Justin exemplifies an urban yogi who embodies the creative blaze of tantra amidst the grit and turmoil of a great city.”
—CHAGDUD KHADRO, spiritual director of Chagdud Gonpa centers in South America

“Modern Tantric Buddhism steps into bold new territory, offering heartfelt accounts while presenting Buddhist reflections on the great issues of our time. Lama Justin invites readers into the brave exploration that has been his life. He offers a stirring presentation of teachings on death as seen through the eyes of a chaplain in hospice work. Captivating as it is instructive, this book is a potent contribution to the development of American Buddhism.”
—PEMA KHANDRO RINPOCHE, founder and spiritual director of Ngakpa International

"Lama Justin represents a younger generation of well-trained Buddhist teachers who encourage American Tantric Buddhists to trust the power of their practice, find their authentic voice, and express wisdom in the modern world. Modern Tantric Buddhism demonstrates that the wisdom of Tantric Buddhism is as relevant and powerful in the streets of Brooklyn as it was in the remote caves of Tibet. A must-read for the modern tantrika!"
—LAMA WILLA MILLER, founder of Natural Dharma Fellowship and coauthor of The Art of Contemplative Care: Pioneering Voices in Buddhist Chaplaincy and Pastoral Work

"Interweaving lived religious experience, tantric texts, and critical theorists, von Bujdoss shows how Western tantra can transform the structural afflictions of colonialism, whiteness, and patriarchy. For academics, he provides instructive and valuable primary data to theorize the multiple forms that Vajrayana Buddhism is taking after  and beyond  modernity.”
—ANN GLEIG, associate professor of Religion and Cultural Studies, University of Central Florida, and author of American Dharma: Buddhism Beyond Modernity

"Modern Tantric Buddhism realigns us with tantra’s original core values of integrity, authenticity, and true empowerment. Lama Justin von Bujdoss—scholar, yogi, householder, and chaplain—shows us what tantra is really all about and how to meet the immediacy of our everyday experiences with greater wisdom and compassion.
—DR. MILES NEALE, author of Gradual Awakening

“Lama Justin von Bujdoss offers us an introduction to Vajrayana Buddhism unlike any other of which I am aware. Arising from his courageous application of tantric insights to hospice work, prison ministry, and the task of ‘healing the earth,’ this book has a unique freshness of approach that will engage a broad spectrum of readers.
—REV. FRANCIS V. TISO, author of Rainbow Body and Resurrection